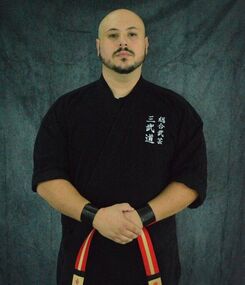 Beginning his martial arts journey at the age of 4, Kaiso Bret Gordon has studied and attained Dan ranking in numerous martial arts disciplines. In 2007, with the opening of Trio Martial Arts Academy in Central Florida, Kaiso founded the system of San Budo as a collection of his previous training. The art he taught, however, was only in its beginning phase and barely resembled the complete system taught today. As Kaiso grew in his personal experiences, his style began to evolve by incorporating  and adapting new concepts from other systems.

In 2012, Kaiso appeared in front of a panel of high ranking representatives from the All Japan Karate-Do Federation (through the Ryu-Sakura-Do Karate Federation) to have his style of San Budo officially recognized as an independent style of martial arts. Upon completion of his examination, Kaiso was awarded a probationary Founder’s license and system recognition certification from both the AJKF and RSDKF with the understanding that the system would continue to evolve over time. With this recognition, Kaiso decided to change the name of his system to San Budo Sogo Bugei to emphasize the well-rounded and complete training experience it provides. Sogo Bugei translates as "complete martial science," a term he felt best described his system's scientific approach to combat.
​
Outside of San Budo Sogo Bugei, Kaiso primarily teaches two other martial arts systems: American Yoshinkan and Satori Ryu Kokusai Goju Kai, both of which he studied directly under Kaiso Steven Hatfield. He earned Menkyo Kaiden (License of Full Transmission) in American Yoshinkan Aiki Jujutsu and Kenjutsu in 2013 and 2016, respectively.

These arts were fully inherited by Kaiso on July 24, 2019 (Satori Ryu Kokusai Goju Kai) and January 12, 2020 (American Yoshinkan Aiki Jujutsu), and Kaiso assumed the position of Headmaster of both arts. When receiving his Sokeship of American Yoshinkan, Kaiso was also awarded a traditional certification scroll from the AJKF to signify that San Budo Sogo Bugei was a fully licensed and recognized independent style of martial arts directly from Japan as well as several traditional jujutsu and aikijujutsu scrolls.

Kaiso Bret Gordon is also a Certified Defensive Tactics and Combatives Instructor through the Law Enforcement Tactical Training Institute. He's one of only a handful of instructors in the State of Florida to be certified by LETTI. Outside of the dojo, he works in private security and Executive Protection. He has served on the security detail for numerous corporate executives and celebrities. Because of his real-world experience, Kaiso Bret Gordon is fully committed to providing the most realistic and effective self defense training methods available.

As a competitor, Kaiso has competed on the sport karate circuits as both a Point Fighter and Kickboxer. Having been scouted by the US Martial Arts Team, he was invited to join and represent the USA at the 2010 World Martial Arts Games where he won three World Championship Titles: Point Fighting, Kickboxing and Team Fighting. 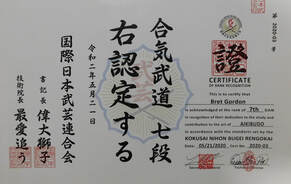 On May 21, 2020, Gordon sensei was honored with an appointment to the Roju (Council) for the Kokusai Nihon Bugei Rengokai, an organization dedicated to the preservation of both classical and modern Japanese warrior arts. In recognition of his experience and his position in American Yoshinkan, he was also awarded the rank of 7th Dan in Aiki Budo.
​
For more information about the Kokusai Nihon Bugei Rengokai, please click here.